National Health Commission Office, in association with Health Law and Ethic Centre of Thammasart University, held a talk on ‘Think Twice before Testicle Removal’ on 9th April 2008 at Faculty of Law, Thammasart University.       The reason for the talk came from recent news about the ban on testicle removal surgery at hospitals and clinics nationwide from the Public Health Ministry. A homosexual group called for the Medical Council of Thailand to set up strict measures on commercial castration for young transexuals. Testicle removal has been a social phenomenon among Thai transsexuals for a number of years. However, this time it has occurred among youths, who are regarded as being impressionable, vulnerable and easily led by fashions and trends. 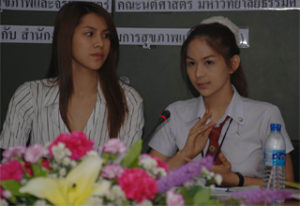 The talk was aimed for information and opinion sharing on legal and health aspects and for finding solutions together. Various experts and qualified persons from laws and health were invited as panelists namely Prof. Swaeng Boonchalermvipas, Director of Health Law and Ethic Centre, Prof. Vitoon Eungprabhanth, Consultant for Thai Board of Forensic Medicine, Dr. Amnaj Kussalanan, Secretary-General of Medical Council of Thailand, Prof. Wachira Kochakarn, Secretary-General of The Thai Urological Association under the Royal Patronage, Mr. Natee Teerarojjanapongs, Director of Gay Political Group of Thailand and Dr. Ugrid Milintangkul, Acting Deputy Secretary-General of National Health Commission Office. The talk was moderated by an attorney, Ms. Wimonrekha Sirichairawan.

Prof. Wachira Kochakarn, began with the functions of the testicle which are producing sperm and producing male sex hormones. Teen homosexuals do not want their physical change as a mature man. Thus they are taking female hormones for beautiful skin, stop beard growing and etc. Recently, they have decided to remove their testicles to decrease their male hormones. “Testicle removal has a health side effect such as a loss of sex drive, a slow-down of bone development and premature Alzheimer” said Prof. Wachira. However, cutting the testicle alone is medically applied to a person diagnosed with prostrate cancer or testicle cancer.

Prof. Vitoon Eungprabhanth shared his opinion that “castration is not a sex-change operation because a sexual organ still remains. And it is not a medical treatment because it is not under any medical criteria unless for prostrate cancer. Anyone can do this operation. If castration is not under medical profession, the question is whether or not laws consider it as a criminal assault The Medical Council should have a clear ruling whether castration is medical practice or not.”

Dr. Amnaj Kussalanan was concerned about this issue as promptly as Gay Political Group called for the Medical Council to handle. “This issue needs various experts such as psychiatrist, surgeon, physician and pediatrician to involve. We will have a board meeting to make a decision whether or not testicle removal is a medical wrong doing on 10th April 2008” said Dr. Amnaj.       Prof. Swaeng Boonchalermvipas, referred to section 8 of National Health Act that in providing health service, a public health personnel shall provide health information in connection with the service to the client as adequately as to decide the proper choice of service. “It is unclear that testicle removal is medical practice or not. The Medical Council has not yet given an answer. If it is under medical profession, the Medical Council will guide to what extent a doctor can do. If not, this act will go through criminal law” supplemented by Prof. Swaeng.

At present, homosexuals and transsexuals are more accepted in Thai society as shown that the government, the Public Health Ministry and the Medical Council take testicle removal into concern. Mr. Natee Teerarojjanapongs voiced that “there should be an agency to provide a hot-line service to transsexuals about positive and negative effect on testicle removal. Youth can call this number for example 1169 to consult about the surgery.”

The talk was concluded by Dr. Ugrid Milintangkul the patient has a right to receive 360 degree information and decide to undergo the service or not. This is clearly stated in section 8 of National Health Act. He added that “if a doctor provides proper and adequate information to a patient, there will not be a medical court case in the future. However every single organization involving this issue should be responsible regarding to its function and role under particular law or commitment”. Source: National Health Commission Office, Wednesday 9th April 2008.