Residents can now seek impact assessments of projects, reports Nantiya Tangwisutijit So what would you do if you woke one morning and discovered that a new high-rise or factory was to be built on the land next to your house? You might wonder what negative effects the project would have on the quality of life in your neighbourhood or community. 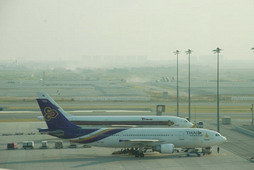 A little-known part of the new constitution gives people the right to demand a thorough assessment of the health and environmental impacts of a project in their neighbourhood. No project which has a severe impact on its surroundings can go ahead without these studies. On Monday a team of Thammasart University researchers met people who live near Suvarnabhumi Airport and asked about applying a health impact assessment (HIA) to their concerns about noise and other health issues that may arise from the opening of a new runway.

“Many residents are concerned they might suffer the same unresolved noise pollution experienced by their neighbours living closer to the two existing runways,” said a Thammasart researcher. “They want to make sure the noise problem is taken care of before a third runway opens.” The National Health Commission (NHC) is spearheading the HIA application. Last month the commission sent its recommendations to cabinet, calling for a halt to the expansion of industry around Mab Ta Pud in Rayong province. “We have had enough of economic development policies that put money first, public health and social wellbeing second,” said Somporn Pengkam, the NHC’s senior officer. “We want the government to delay the expansion of Mab Ta Pud until it deals with health and social problems from the existing industrial estates.”

In Bangkok, the NHC is looking at the need for HIA to be applied to land use zoning and building polices that continue to allow property developers to erect high-rises anywhere, with little concern for the impact on the neighbours. Recently a campaign was launched by National Artist Chakrabhand Posayakrit, who is trying to save his house, where artists make their livelihood, from a 32-storey condominium project planned next door. “Ajarn Chakrabhand’s case is ripe for the use of HIA to foster desirable policy changes,” says NHC secretary-general Dr Amphon Jindawatthana. “Urban planners have to learn to think of the overall impact of their decisions on public health and the long-term quality of life in the city.” Source: Bangkok Post