NHCO / Story of the Month  / A brainstorming session on the end of asbestos discussed relevant measures that the cabinet will consider in September
by Pectcharath Kongvichienchep
Story of the Month, 2012

DIW organized the last brainstorming session on July 4 to work out measures to stop the use of asbestos and the measures should reach the cabinet within this September.

Mr. Chumpol Cheewapraphanant, Deputy Director-General of the Department of Industrial Works (DIW), said the DIW organized the forum to gather opinions from all parties for its plan to stop the use of asbestos for the sake of public health and the national economy. The department will propose the plan to the cabinet within September this year. 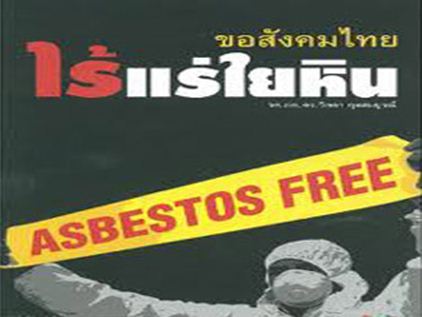 The plan of the DIW focuses on a process to reduce and then stop the use of chrysotile or white asbestos. Consumers’ networks have demanded an end to its use and cited a research of the World Health Organization which finds that it is carcinogenic. The plan covers five product items – namely roman tiles, flat tiles, rubber floor tiles, cement pipes, and brake and clutch pads – will lead to the end of its use in a year.

Mr. Uran Kriewsakul, President of Oran Vanich Co, said he disagreed with the idea to end the use of asbestos because nothing could really replace it. Roof tiles can be made of paper pulp but they are very expensive. Among 10 countries in the upcoming ASEAN Economic Community (AEC), only Singapore ends the use of asbestos. If Thailand follows suit, that will certainly affect its competitiveness and its people will have to buy expensive products. He does not think the idea will do any good to the nation.

“Only 55 of 194 member states of the World Health Organization have stopped the use and so far it has not been proved that asbestos causes death. If Thailand ends it, that will be tantamount to executing the innocent,” Mr Uran said.

A source in the Roofing and Accessories Industry Club of the Federation of Thai Industries said that in the past four years FTI chairman Payungsak Chartusutipol always insisted on the FTI’s policy to call for an end to the use of asbestos and replace it with other substances because developed countries already stopped using it. The study of the WHO has reached the firm conclusion that it has negative impacts on health.

However, the operators who are not ready to do so should have some times to prepare for their considerable investments in machinery replacement. The source confirmed that there were replacements for asbestos.