A research points out that the government should review the objectives of the Thai-EU FTA as it can do more harm than good and allow foreigners to monopolize the species of fauna and flora.

NHCO / Story of the Month  / A research points out that the government should review the objectives of the Thai-EU FTA as it can do more harm than good and allow foreigners to monopolize the species of fauna and flora. 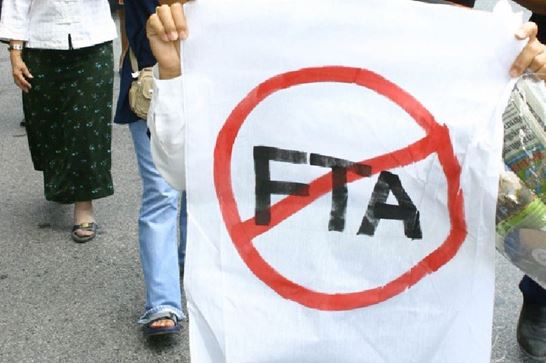 The BioThai Foundation and the National Health Commission Office (NHCO) organized a discussion on the impacts of the planned Thai-EU Free Trade Agreement (Thai-EU FTA) on biodiversity. Participants urged the government to review the objectives of and benefits from its FTA negotiation with the European Union (EU) as the FTA can allow transnational companies to obtain patents for and access to such resources as seeds, herbs and microorganisms worth tens of billions of baht. Thai farmers’ costs will soar by 2-6 times and Thailand can lose its potential for good. If the government does not have sufficient information for its negotiation, the talk should be suspended.

Witoon Lianjamroon, director of the BioThai Foundation, said the research showed that if the Thai government signed the FTA, the EU would put Thailand at huge disadvantages in relation to economic dimensions, the security of natural resources, biodiversity and genetic resources because foreigners can have greater access to the resources and create the monopolies of trade and intellectual property. Biodiversity in Thailand accounts for 10% of worldwide biodiversity and it is applied for the production of herbal medicines worth over 10 billion baht as well as foods and cosmetics worth 48 billion baht annually.

Firstly, Thailand will be a member of the International Union for the Protection of New Varieties of Plants (UPOV) which is an international organization that protects intellectual property concerning plant varieties. The condition will increase the seed costs of Thai farmers by 2-6 times to 80,721-142,932 million baht. It is likely to force Thailand to lift its plant variety protection law and provide foreign companies with easier access to the varieties of Thai plants.

Thirdly, patents on creatures will be expanded and this can result in problems about morality as humans can own other kinds of creatures or even fellow humans and monopolize genetic resources and small-scaled farmers will fall victim to monopolies on seeds, chemicals and foods.

Dr Wiput Pulcharoen, chairman of the Health Impact Assessment Commission, which is appointed by the National Health Commission, said options should be studied for the FTA negotiation. They should range from the options of whether the FTA should be sealed and if it should happen, what the scope and purpose of the free trade is. The results of the research will be reported to the government. Although the FTA negotiation is taking place in Chiang Mai province, the process of the international negotiation has yet to be finalized. Concerned parties and general people still have chances to present useful information to authorities.

Professorial Fellow Supree Wongdeeprom from the National Economic and Social Advisory Council said that, regarding the results of the research, the advisory council suggested that the government delay the trade negotiation. The delay is possible as long as the international trade negotiation is unlikely to bring about any benefit. The EU is urging the Thai government to quickly seal the FTA possibly because it has suffered from economic problems since 2008 and its recovery has not been in the pipeline.

Boonsong Fakthong from the National Farmers Council said the information should be communicated to the farmers who stood to feel the greatest impacts. They are suffering from the impacts of the FTA of Thailand, Malaysia and Indonesia that causes the price of oil palm nuts to plummet because palm is categorized as a non-sensitive plant. Actually it is highly sensitive because Malaysia grows it better and thus its cost and price of palm are lower. The cost of Thai palm planters is higher, so the FTA results in a very low price of oil palm nuts in the standpoint of Thai farmers.