NHCO / Story of the Month  / Ecological justice in Tha Sala 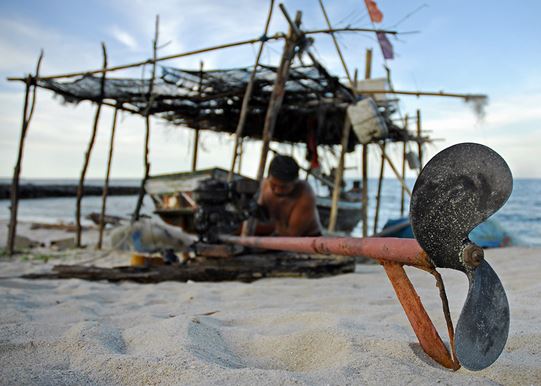 Globalization leads to severe conflicts especially on natural resources. We have seen many conflicts between villagers and capitalists in many areas. The project of Chevron Thailand Exploration and Production Co Ltd to build a deep-sea port in the Ao Tha Sala bay in Nakhon Si Thammarat province led to conflicts between the giant transnational company and the local fishermen who want to protect the ecosystem of the bay that they dub “The Bay of Gold” for its abundant resources.

Assist Prof Noppanant Wannathepsakul of the Faculty of Economics at Chulalongkorn University, conducted a qualitative research on the ecosystem of the Ao Tha Sala community. The research was based on the researches of the community, the in-depth interviews of community leaders and people in the areas of the Ao Sichon bay and Tha Sala in Tha Sala district of Nakhon Si Thammarat province, group conversations, the non-participatory observation of the community, released information, printed media, articles and relevant researches. The research looked into the institutional mechanisms that support the community, the mentalities of community leaders, the economic and social development of the Ao Tha Sala community and past social movements.

The principle and meaning of ecological justice

Secondly, it means the multidisciplinary social science that covers many sciences including theories about the environment and justice, environmental laws, good governance, supervision on environmental policies, sustainable development and plans, and political ecology.

There are more definitions than both mentioned ones. The Environmental Protection Agency (EPA) of the United States define “environmental justice” as “the fair practice and meaningful involvement of all people regardless of race, color, sex, national origin, or income with respect to national policies, development, implementation and environmental laws enforcement.”

The ecological justice of the Ao Tha Sala community

The ecological justice of the Ao Tha Sala community is based on four values: solidarity, ecological sustainability, sufficiency and participation. At present, community dwellers fight for ecological justice to protect their environment, health and wellbeing from the threats that result from economic and social changes. They also keep the rules of their community for its sustainability. The people maintain their conventional mechanism, their fishing rule which seriously emphasizes conservation. Meanwhile, they also apply modern mechanisms: their rights under the constitution and the National Health Act, health and environmental impact assessment, the presentation of findings from the assessment and the international introduction of the community as a source of foods.

The people also use the mechanism of a democratic institution. That is they have their local administrative organization issue local regulations on the exploitation of marine resources that are public resources.

The research on the ecosystem of the Ao Tha Sala community finds care for other life forms, adherence to equality and mutual respect. The Ao Tha Sala community has established its ecosystem for a long time and the values of the ecosystem are included in the institutional mechanisms that are used for present social movements. People will benefit from their care for the abundance and sustainability of their own ecosystem.

The Ao Tha Sala community is apparently modernizing itself to develop coexistence between human and nature but it is facing many obstacles including the big one, “environmental discrimination”.

Communities can be the operational units that possess internal mechanisms to distribute resources and create justice. What should be done next is to incorporate the good old values of communities in the processes of adjusting themselves to the changing ecosystem.