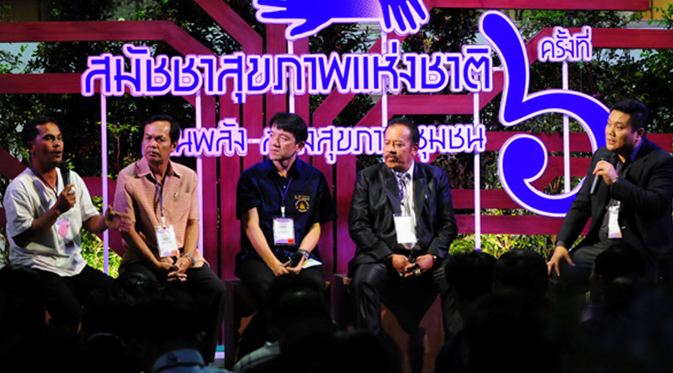 During the seminar entitled “One Province, One Area, One Case Study”, representatives of the organizations that received the awards this year shared their experiences in running their respective campaigns.

Dr Saengchai Pongpitpitak, director of Soungmen Hospital in Phrae and also initiator of Thailand’s first “District-level Health Statute” which was launched in 2009, said the concepts behind the scheme stemmed from his work as a medical doctor having to deal with a steadily rising number of patients at the hospital. At the time, there was a novel concept in the healthcare system, that health is not the exclusive realm of doctors or public health personnel, but something that everybody must participate in. Incidentally, the National Health Act was being promulgated, so he decided to study and apply the law by initiating a dialogue between the public health staff and the district chief, local communities and the public health volunteers, as well as consulting with NHC secretary general Dr Amphon Jindawatthana. Sanit Khemwattana, then district chief of Soungmen, provided a lot of support as did several sectors that collaborated in the scheme.

“Community participation is very important. We have received cooperation from several local sectors, resulting in the birth and sustainability of the Health Statute. I would like to thank all of the staff in Soungmen district. Many people have said that [implementing] the Health Statute is a difficult task, as it requires coordination with different parties. But if they can see the common goals that will benefit everyone, people are willing to take part. Thai people are good and have a benevolent wish to see happiness in their communities, but they just don’t have someone to guide them and point out what should be done.”

Nirapong Sukmuang from the Pattani Provincial Health Assembly said the scheme is an initiative by the locals who explored and analyzed the problems themselves:

“We have learned that the process of setting up a Health Assembly requires participation by the locals in the regions from the start. They must take part in the process by brainstorming ideas, prioritizing issues, adapting and mobilizing agendas with various organizations and networks, until they are implemented as public policies. The Pattani Provincial Health Assembly is a mechanism consisting of four components, namely the state, academics, politicians, and the civil society sector that work together to promote public policies in the communities, at the district and provincial level. We are just supporting the locals who have been affected by the problems in the respective areas.

“It actually took seventeen years to reach the current point although the Assembly was officially launched in 2009. But we were working on this long before, from the drafting of the Health Act, the Health Market scheme and so on. It takes time to build understanding on public health policies.  There are differences in levels of knowledge among people working in the public arena. Those from the state sector are not a problem. But there are gaps in knowledge and understanding among the lay people, so we have to train them to understand what public policy pertains first.  “We are very determined to develop the mechanisms. We adopted the training mechanism. We received a budget from several agencies. We built networks, collected data, and proposed setting up the provincial level assembly.”

Dr Sombat Kaiyasit, director of Ban Puey [Sub-district] Hospital in Amnat Charoen provincedescribed Ban Puey as a place that enjoys abundant social capital, numerous networks and alliances doing public work on environment and social wellbeing. There are also a youth group that does anti-drug campaigns like ‘To Be Number One’ and groups of elderly folks working on body-mind-spirit issues, as well as other dedicated staff.

“Such organizations are already well established. It’s clear that there is this spirit of help, throughout the life cycle, that is not dictated by the state but by initiatives of the people themselves, such as during religious ceremonies and funerals that are free from drinking and gambling. We already have such resources. In the beginning, Puey sub-district had four communities participating. We thought about how to expand the network to other communities. We searched for information and then presented it to let the communities make the decision themselves.

“We collect(ed) information from the people.  For example, we found that a typical ordination ceremony would cost 80,000 baht, out of which 50,000 baht would cover food, and the other 30,000 baht went to pay back the debts to the Agricultural and Agricultural Cooperatives Bank. The expenses were linked to drinking. Upon presenting this finding, the locals realized the problem. Before everyone just minded his or her own business. But now every party comes together to plan how they want to address their health problems in order to achieve sustainability, sharing, creative learning, and general wellbeing by the year 2016.”

Another interesting case is the Ban Tha Sala village on Tha Sala Bay in Nakorn Sri Thammarat.  This is a story of how ordinary people could employ the health impact assessment as a tool to counter a large multinational that planned to build huge port facilities, resulting in the project being cancelled.

Suporn Tohsaen from Tha Sala District, Nakorn Sri Thammarat said the fisher folks had to stand up to fight because One the company falsely claimed that there were only nineteen fishing boats in the entire district while in reality there are 2,000 boats. The port construction would entail relocation of the whole community and searching for new jobs. But the folks here have been fishing for generations, and it would be impossible for them to switch to working on the rubber plantations. Since the locals are Muslims, relocation would entail cultural change. Another concern was air pollution even though the company claimed it would not affect fishing.

“Fisher folks live a very complex life. It is not like any other jobs. In Nakorn Sri Thammarat, we do coastal fishing, in which sometimes we just use our ears to listen to the sound of the fish. In my village, we dive about one metre underwater to listen to the fish. Since the sound travels faster in water than in the air, any pile driving would drive the fish away. This is one complexity I am talking about. But the company is searching for oil in the Gulf of Thailand and they wanted to place beams as deep as 500 metres. Another big concern is how they plan to dredge the channels every year which would kill the hatchlings.”

“The villagers have used the Assembly process to collect data among themselves.  They learned there are 2,000 boats and how much they earn from selling their catch. Their survey of the marine life in Tha Sala Bay found there are 260 different species. We also have small factories that employ over five thousand people in the communities.” It is estimated that the sale value of marine catch in Moo 5 and Moo 6 of Tha Sala Sub-district is worth about three million baht a month. At present, the company has announced a termination of the project in Tha Sala, but the construction permit has not yet been cancelled.

All these are examples of how communities can push for change!