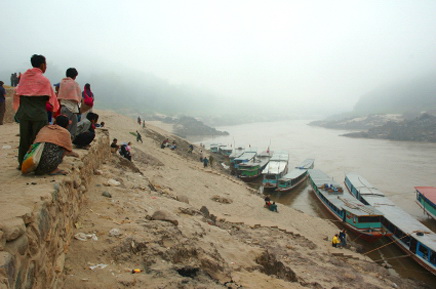 The Mekong River looks a pale imitation of the mighty waterway it once was. The water flows sluggishly in a channel which has shrunken in a few metres wide in some part of Loei province. Summer is the time when the section of the Mekong usually dries up. But for, Bu Pengkham, a resident of Ko Wao village in Chiang Kan district the river is already sick.

On Friday, Mr. Bu and his fellow villagers tried to improve the health of the river by staging a traditional Isan ritual earn Kwan (a ceremony to restore moral or inner goodness in person).The villagers believe that the river is similar to a person who has lost his or her kwan and become ill.

Mr. Bu conducted the ritual. He placed a banana leaf decorated with auspicious drawings in the centre of a cycle of villagers who joined the ceremony. Through the microphone, he chanted to the waters, consoling the water’s kwan and urging it to return to the river.

“If there is anything there, that scares you and makes you sick, we’d like it to go away. And kwan, please come back” chanted Mr. Bu.

Mr. Bu and his fellow villagers make their living from fishing and gardening on the river’s bank in the dry season.

Mr.BU, 70, has seen the Mekong threatened his whole life as river populations increase and threaten its viability. But nothing worries him than dam projects. First Pha Mong in Laos river section, then Pak Chom and now Xayaburi in Lao’s Xayaboury province, about 200 km away.

Construction on the US$ 35 billion ( 107 billion baht) Xayaburi dam along the Lower Mekong is set to begin next month, despite concerns from environmentalists that it has circumvented environmental protection measures.

Questions have been raised over whether Thailand, which will be the main consumer of the dam’s electricity, really needs the power supplied by the project, which is a joint venture involving the Lao PDR government and Thai Company CH Karnchang.

Mr. Bu said that while people may have damaged the Mekong, this was nothing compared to big dam projects. The Xayaburi dam would have the biggest impact on villages of all, Mr. BU said.

He wants to talk to the people in charge of the project and urge them to consider the livelihoods of river dwellers. He wants to explain what the river means to people from the perspective of a person who has lived in it his entire life.

But Mr. Bu has no idea who he should contact. The villagers have no idea who is in charge and who they should turn to, he said. “When they want to build a dam, they don’t tell us a word. Don’t they care ay all how we will be affected?” he said. They have never come to us. We never see them”.

The Xayaburi dam is the first of 11 proposed hydropower development projects along the Lower Mekong. Vietnam and Cambodia are opposed to the project, saying it will harm biodiversity and hurt 40 million people who depend on the Mekong for their livelihoods.