MoPH backs outlawing all asbestos use

Permanent secretary for Public Health Narong Sahametapat has backed a push to outlaw these of all asbestos in Thailand.

His stance has been welcomed by civil society groups which had been campaigning for an asbestos ban for two years. 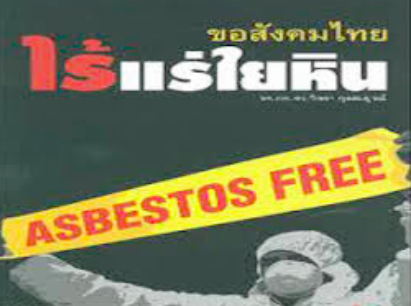 The PublicHealth Ministry, at the behest ofDr Narong, came up with the resolution on Wednesday to push forward a ban on chrysotile, the only asbestos type that is yet to be banned in Thailand.

“We’re satisfiedwiththe resolution after two years of trying to convince the ministry about the dangers of chrysotile,” said T-Ban network coordinator Somboon Sikamdokkae.

“We hope the ministry will work with us to clarify how the resolution will be put to practise.”

T-Ban was told that Dr Narong would be incharge of the ministry’s study committee on asbestos health impacts.

The committee, set up in 2010, was previously chaired by health deputy permanent secretary Charnwit Tharathep.

In Dr Charnwit’s absence, the meeting ended with Dr Narong’s agreement to undertake academic studies on the dangers of asbestos.

The ministry will write a summarised report to propose to the industry, commerce and foreign affairs ministries as well as theOffice of Consumer Protection Board to urge them to implement measures that are in keeping with the resolution to ban chrysotile.

“The resolution was unexpected,”said a source from the National Health Commission Office (NHCO) who was at the meeting.

Asbestos is a known carcinogen that is used in construction materials. In 2010, the third National Health Assembly (NHA) resolved to push forward the ban of all types of asbestos in Thailand.However, chrysotile continues to be used.

The World Health Organisation suggests all types of asbestos are harmful to health, leading more than 50 countries to announce a total ban.

The NHA resolution led to the 2011 cabinet resolution to assign the Public Health Ministry to set up an academic committee, chairedby Dr Charnwit, to study the impacts onhealth of asbestos.

However, academics on the panel struggled for more than two years to convince Dr Charnwit. Some of them gave up and resigned from the committee, the source said.

Dr Charnwit has insisted to the media that there was not enough medical evidence in Thailand to support the view that asbestos poses a health danger.He has vehemently denied claims asbestos companies had lobbied him.

T-Ban told the Bangkok Post that it sent acomplaint letter to Dr Narong on Jan 10 to askhim look into the asbestos issue.