Nakhon Pathom is piloting provincial integration for the sake of national reform.

To support national reform, authorities in Nakhon Pathom province had their first meeting on 3 May 2011, to work out a provincial integration plan for its future. The concerned parties that attended the meeting were Mahidol University, Silpakorn University, provincial health office, a conservation club for the Tha Chin River and Nakhon Pathom, the Nakhon Pathom Youth Council and the president of the Tambon Bang Rakam Administrative Organization. They brainstormed ideas on provincial integration for the sake of national reform. 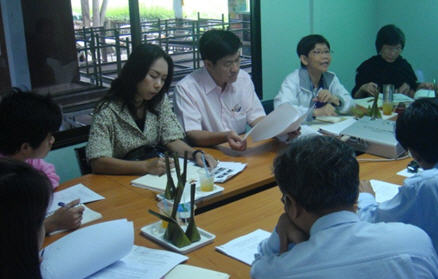 The meeting agreed to form a central mechanism to coordinate the integration and three sub-mechanisms to handle (1) the integration of people, resources and work areas; (2) the management of knowledge and academic activities; and (3) social communication. The mechanisms will ensure unity in the forms and directions of work.
In addition to Nakhon Prathom province, other 6 provinces – Chiang Rai in the north, Trang in the south, Amnart Chareon, Khon Kaen and Loei in the northeast – are gearing up to work out provincial integration to respond the existing and new challenges and plan for their future based on their social capitals and resources