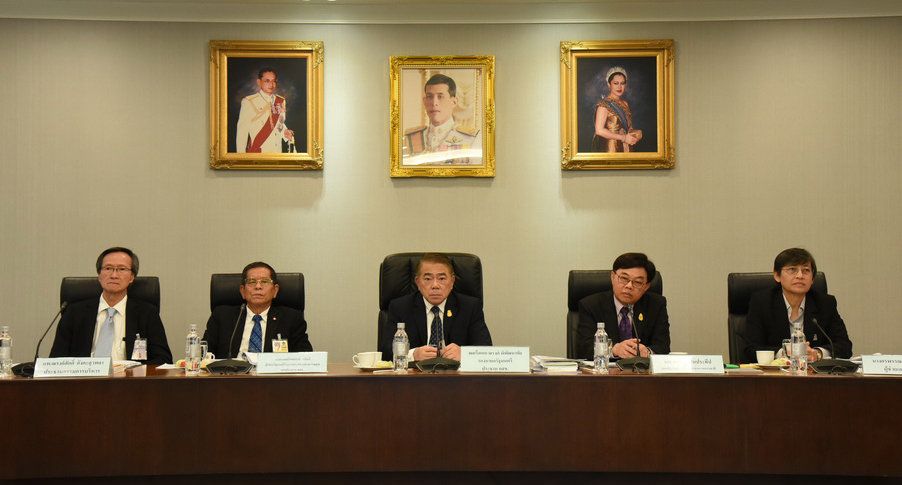 The National Health Commission had its 6/2560 meeting at Government House on November 17, 2017. Adm Narong Pipatanasai, then-deputy prime minister and chair of the commission, presided over the meeting with the presence of Dr. Poldej Pinprateep, secretary-general of the commission.

Adm Narong said the National Health Commission acknowledged the progress of the Participatory Public Policy Process based on Wisdom (4PW) at the local level in fiscal 2017. It achieved goals under the 3rd main plan of the National Health Commission Office (NHCO) for 2017-2021 implementation, which were intended to encourage parties in all sectors to take part in developing and implementing healthy public policies in 82 areas consisting of 76 provinces and six zones of Bangkok.

“Project achievements included garbage disposal in Na Thon sub-district of Thung Wa district in Satun province. A key factor is its leader. If leaders including religious and community leaders are strong, develop initiatives and have leadership, local residents will cooperate and problems will be solved. Local residents should apply models of good practices to the activities of their communities.”

Dr. Poldej said 4PW could happen at all levels. Local residents, local administration organisations, government and private organisations and provincial civil societies can combine the power of their knowledge, policies and societies to develop participatory public policies. The participation can begin with identifying local health problems and then proceed with knowledge-based discussions to work out solutions and policy proposals for implementation by organisations and communities. The implementation can be facilitated with three key instruments under the National Health Act B.E. 2550, which are national health assemblies, health system charters and health impact assessments.

In 2017 the NHCO’s support for local 4PW networks resulted in 190 resolutions or policy proposals. From the proposals, 174 participatory public policies were developed. In the North which covers 18 provinces, local communities presented proposals including those on the expansion of organic farms, solutions to smoke haze, rice growers’ well-being, ethnic people’s health assemblies and local health charters.

There are good plans to push for the implementation of policy proposals. An example of achievements came from people in Chai Nat province. They used community health impact assessment (CHIA) to develop community-based data to solve conflicts over safe tap water management among their communities. People in Nang Lue sub-district of Muang district reached an agreement on water consumption.The agreement was declared a municipal rule. The government and local communities jointly check water quality and the environment.

In the Northeast, training for leaders of local networks in 20 provinces led to health charters in 43 sub-districts. About 50 proposals that were the resolutions of provincial health assemblies resulted in activities relating to 73 issues.

They included the promotion of safe foods in Yasothon province that used to suffer from chemical residues in vegetables and fruits. Such hazardous residues were found in 46.4% of tested samples. Yasothon’s health assembly successfully pushed for a provincial policy to develop Yasothon into a province of organic farming. There is a health charter of Non Pueai sub-district which emphasizes food safety and resulted in the supply of organic foods to hospitals and restaurants. In Udon Thani province, public policies on road safety inspired cooperation from all parties to reduce danger-prone sections of roads.

In the South 4WP-based cooperation was promoted to support solutions to local problems. In Chumphon province, network members implemented a resolution of the provincial health assembly on the protection of children and the youth from alcoholic beverages. Later the provincial governor treated it as a provincial mission and ad hoc teams were formed to support law enforcement. The issue was included in the health promotion plans of Sawi, Thung Tako and Pathiu districts. Consequently 1,287 people refrained from drinking alcoholic beverages during the Buddhist Lent period and 132 others quitted drinking for good. Besides, there were juvenile policies of the Yala municipal office, a strategic plan on organic paddy fields of Phatthalung province and anti-dengue policies of Satun province.

In the Central Plain, 31 policy proposals were developed. The proposals were put forward on 72 issues. They included a resolution of the health assembly of Nonthaburi province on campaigns against the use of foam food containers. It led to the “Nonthaburi Say NO To Foam” policy of the province. There were also a resolution on the well-being of the Chedi Bucha community in Nakhon Pathom province and a garbage disposal resolution of the health assembly of Chachoengsao province that was successfully implemented in Phanom Sarakham municipality.

In six zones of Bangkok, district networks are being established, issues are being studied and there are activities to support the formulation of public policies. For example, data on the Mahakan Fort community are being compiled. There are forums for knowledge exchange and activities to improve old communities. Networks of health security enthusiasts and the Foundation for Consumers are supporting the management of local health funds in Bangkok.