NHCO: Health security system reform must not go backward _ the people’s networks must participate in management.

NHCO / Story of the Month  / NHCO: Health security system reform must not go backward _ the people’s networks must participate in management. 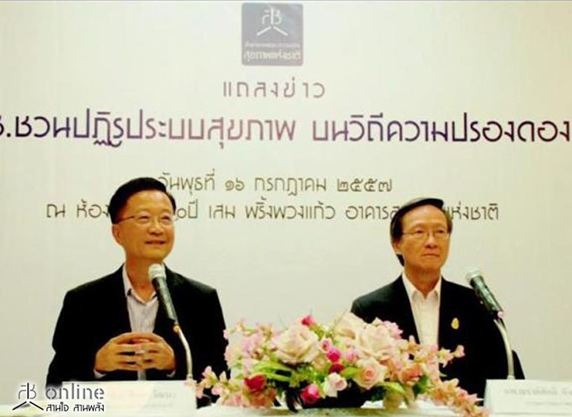 The press conference was launched following calls for reforms in various areas, and a recent public hearing organized by the National Council for Peace and Order (NCPO), that collected data to be submitted to the National Reform Assembly, yet to be set up. The NHCO is one of the mechanisms in the health systems that operates on the basis of a participatory approach wherin every stakeholder is encouraged to take part in the drive to reform the health systems and to reduce conflicts for the public benefit. Below are recommendations on how to reform the health systems following a path of genuine reconciliation:

On July 16, 2014, at 1.30 pm, NHC board member Dr Narongsak Angkasuwapala and
secretary-general Dr Amphon Jindawattahana hosted a press conference on the theme
of “NHCO’s health reform on the path of reconciliation” at the Sem Pringpuangkaew
Centennial Library on the first floor of the National Health Building.

NHC board and representative of the people’s sector (BMA’s Zone 1) Dr Narongsak Angkasuwapala said recent reports on the health security reform campaigns revealed differences in views on how to adjust to the changing economy, society and environment. The old style of governance is no longer viable and there is need to keep pace with social change. But so far the only agreement reached is the wish to see improvement in the health systems in Thailand.

“The issue of health security development has long been advocated and presented to the government which finally acceded to it, resulting in implementation of pioneering programmes relating to the state and welfare, and social security that go beyond the issues relating to health, but extend to education, senior and child care, and so on, and which continue.  Therefore healthcare security is not just about low-income people as presented in the media, but is for every Thai citizen, for anyone who wishes to exercise their rights. The voluntary principle of cost-sharing has remained the same: whoever is willing to contribute 30 baht can do so.”

Concerning claims that universal coverage (UC) under the health security system has taken up over 13 percent of the GDP and thus may pose a serious burden on the national coffers, Dr Narongsak pointed out that the real figure accounted for only 1.3 percent of the GDP. There was no need to worry about the substantial rise in UC expenditures since universal healthcare security has been under supervision, control, monitoring and governance by the National Health Security Board, of which the management structure has been designed by a network of representatives of the people’s sector, local groups, professionals, and academics, that are linked to state agencies (namely the ministries of public health, finance, defense, interior affairs and education and the Budget Bureau). Governance by the network that is close to the state sector should thus be considered as almost perfect.

With regard to the achievement of the universal health security system, Dr Narongsak said the Thai model has been appropriate and has set a precedent in health security. Patients who suffer from high-cost illnesses can now access medical services while keeping their costs down.

During the press conference, NHC secretary-general Dr Amphon Jindawatthana stated that the sixth National Health Assembly approved all the six-point resolutions on Health Reform, in the contexts of the National Reform. In particular, the second – point resolution stipulates that the National Health Security Board adopt the principles and guidelines for health reform and carry them out under five sub-themes.  Specifically regarding the first issue of health promotion and protection and management of health hazards, Dr Narongsak pointed out there have been many changes in the risk factors, such as non-contagious diseases and accidents, thus, it is not possible to maintain the status quo. Second, the healthcare reforms should start from the bottom up, and involve planning and revision of human resource developments at every level. The issue of cost sharing that was raised a couple of days ago is but a minor topic in the larger health and financial system.

The reforms of the governance system and the health systems as well as the development of healthy public policies should not concern only the medical system under the aegis of the public health ministry, but also the [healthcare] governance network outside the ministry which is also run by a variety of networks. The majority of the society often misunderstands that the state should be solely in charge of the governance through the public health ministry and its various departments. But health care is not something that can be run from the top down like security or control of violence, but requires participation by every sector of society. Thailand has already made much progress on the aspect of public participation. In short, the issues of the governance network are deemed important and already in the [NHC’s] recommendations and resolutions.

Therefore, to return to the old style of state-run governance appears to be an untimely and backward move. The direction in our country recently has been toward public participation, constructive collaboration, lessening of state-run governance or centralization, and redistribution of capital and resources to local communities.  But at present, we may need to keep an eye open since certain groups may try to push for re-centralization, which could affect the health systems. There have been proposed plans and procedures to transfer state run hospitals to local communities, or to transform them into more flexible structures that still belong to the state. Dr Amphon said such issues were important but the discussion has been dominated instead by the issue of where the budget would go and whether or not it would increase. After all, the public health ministry has been the core governing body for the health system.

The NHC secretary-general added that the public health ministry has been considering how to distribute control over its existing healthcare service centres. The questions are if the ministry receives the same or greater budget, will it be possible to maintain the state-run governance system and whether or not it is efficient, considering that the service system under the care of the ministry is huge and covers hundreds of thousands of personnel. Under the centralization regime that applies the same regulations at every level – from the village to the health stations, hospital centres and mega-hospitals – will there be problems of inefficiency? Such issues should be raised for further public scrutiny. Without improvement, no amount of money would be enough to handle the bureaucratic red tape producing delays in appointments and issuance of salaries to the new medical staff even after four months of work, and the lack of incentives due to the centralization of administration. The NHC thus sought to raise awareness of these important issues.

“There is more to discuss than the money issues. Our country needs reconciliation to search for ways to bring happiness to people and reduce their suffering and to overcome social conflicts. Those agencies or organizations that have a lot of power should try to rely less on the use of power but adopt reconciliatory approaches, engage in governance by networks, appreciate the value of other organizations, and carry out reforms leading in an appropriate direction through decentralization and improvement of the management system instead of reverting back to the old style of management,” concluded Dr Amphon.