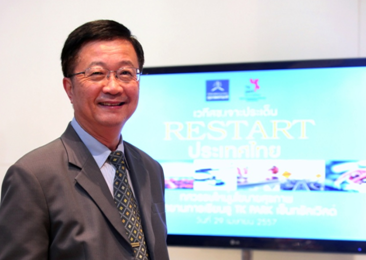 The secretary-general of the National Health Commission comes up with five proposals to reform health systems. He emphasizes the implementation of the “Health in All Policies” concept and encourages people to participate in formulating public policies to cope with political, economic, social, technological and environmental challenges.

On April 29, 2014, the National Health Commission Office of Thailand organized a discussion on “Restart Thailand in the New Century of Health Policies” at the Thailand Knowledge Park (TK Park) on the 8th floor of the CentralWorld shopping center in Bangkok.

Regarding the situations of Thailand in the next decade, Dr Amphon Jindawatthana, secretary-general to the National Health Commission (NHC), said the country would face the well-being problems that would be more complicated and serious in the political, economic, social, technological and environmental contexts.

“Concerned organizations must be prepared to cope by designing strategies to “reform health systems” and joining forces to implement them when the Thai society is paying attention to calls for national reform.”

Regarding its political context, the NHC secretary-general said Thailand would continue to experience uncertainty and conflicts but its people would develop opposition to authority abuse. Corruption is an important milestone of participatory democracy that will lead to the decentralization of power to communities and localities that can thus shape their own health policies.

In the economic context, there are free trade at national and regional levels and a policy to develop the country into a medical hub. The growing number of transnational workers will have impacts on health services for Thai people and inequality will increase.

In its social context, the NHC secretary-general said Thailand would become more of an urban society. Middle-class people will increase in number but inequality will remain. Diseases will result from rushed lifestyles as well as the kinds of consumption and the environment that harm health. In 2030 Thailand will completely become an aging society as the elderly will account for a quarter of its population.

In the technological context, advanced communication systems will be developed. Consequently people will have quick access to health information and form powerful groups. Yet the development will also have negative impacts. For example, it will bring about internet addiction and the advertising of fake health products.

“Everyone and every sector should take part in changing health systems to improve them,” Dr Amphon said. According to him, networks of the National Health Assembly have been encouraging all parties to participate for the sake of concrete and continuous progress and there are five proposals to realize the improvement as follows.

The health reform proposals will be considered in the 6th National Health Assembly set at the Impact convention and exhibition complex in Nonthaburi province on June 17 and 18, 2014.