NHCO / Story of the Month  / NHCO’s grand technical conference in June will mark its 9th anniversary and reform health systems to improve the life of Thai people
by Pectcharath Kongvichienchep
Story of the Month, 2015

Dr Mongkol said the reform of Thai health systems would encourage people to push for the public policies that meet their needs. The academic conference to mark the 9th anniversary of the National Health Commission Office (NHCO) from June 10 to 12 will see the exchange of lessons that will empower citizens to cope with future threats and inequity.

Dr Mongkol na Songkhla in his capacity as the chairman of the committee organizing the academic conference said that the reform of health systems in the past two decades resulted in enormous changes in ideas and perceptions from all parties. The focus has shifted from expanding health care services to the concept of health promotion. People have been encouraged to take good care of their health while the government gives support to enable people to do that and offer health security such as establishment of health promotion fund, universal health coverage and community empowerment. 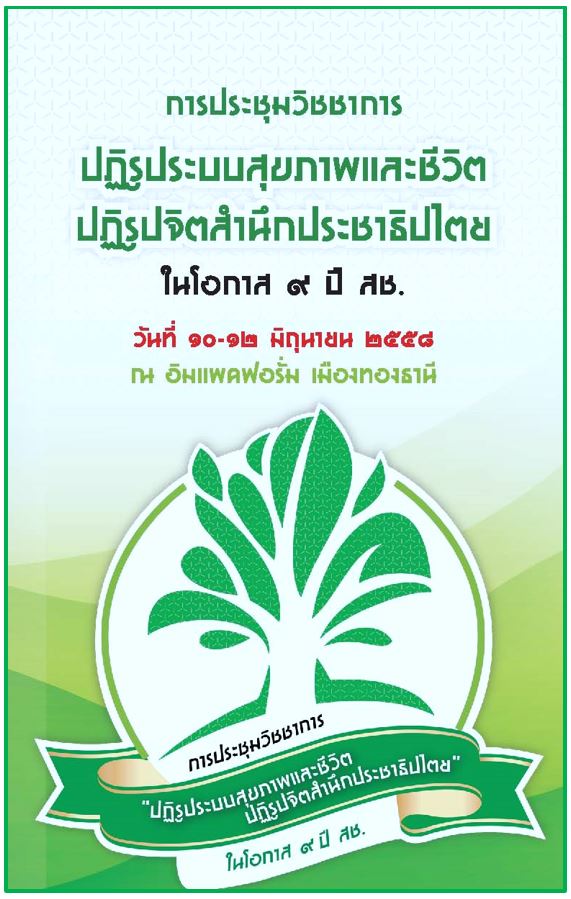 Dr Mongkol said that the National Health Act B.E. 2550 was a turning point as it created instruments for a big reform of health systems. The reform happens through “the participatory process to develop healthy public policies” in which all sectors in society have their say in proposing health policies. This results in a change of the policy process from top-down to  bottom-up approaches. The change has prompted people, communities and organizations to actively develop network based management.

“Health is no longer the matter of the Ministry of Public Health alone. Other agencies must also factor in health when they develop their policies. Besides the lack of opportunities or instruments for people and other sectors to have their say in health policies is history. With the National Health Act B.E. 2550, people can take part in brainstorming and efforts.”

“The reform of health systems which is encouraging citizens to take part in designing their own life and health gets along with the democratic reform in Thailand which is shifting from representative democracy to direct democracy which increasingly emphasizes participation. This will be successful if people are supported in taking full responsibility for national affairs. In other words, the democratic awareness can be created through the new era of health systems,” said the chairman of the committee organizing the academic conference.

Assoc Prof Wilawan Senarat, head of a sub-committee for the capacity building and learning, said that main activities would reflect people’s increasing interest in having their say in shaping healthy public policies through instruments under the National Health Act namely health system charters, health assemblies, health impact assessment and the exercise of health-related rights.

“This conference will reflect the results of attempts to push for policies at the national level and the processes to develop provincial health assemblies and local health statutes. They will be presented and exchanged. The strength of citizens must be developed through actions and reduction in dependence on the government and requests for assistance.”