Speaking at the closing ceremony of the third National Health Assembly (NHA) on 17 December 2010, Prime Minister Abhisit Vejjajiva said civil participation was necessary in the time of crisis.

“The issue of health is not solely the role of the public health ministry, but the involved agencies have to work in synergy and not only for the health of the people but also the health of the society”, Abhisit said. 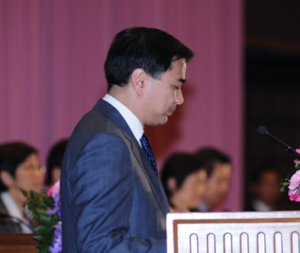 Witnessed by the economic led growth previous policies cause social problems and negative impacts in ecology and natural resources allocation, from now on any policies should consider these impact into account. Thus, civil participation is necessity. Like the National Health Assembly, many problems have found solutions from a systematic and harmonious dialogue here.

“For example, the incessant problem of Map Ta Phut’s case has damaged  the trust of the people towards  the government. We decided to announce Map Ta Phut as the pollution control area and brought all stakeholders to join in solving the problems as well as taking care of the health of the local people. This solution partly came from the recommendations by the National Health Assembly” said the Premiere

Prime Minister Abhisit Vejjajiva said the Southern Sea¬board Development project would be put on hold as the government had learned a lesson from the Map Ta Phut Industrial Estate case that civil par-ticipation was essential to creating a society with health and well-being.

Ten agendas were adopted, including collective action to overcome inequities, control of marketing strategies of infant and young child nutrition, measures to becoming an asbestos-free society, fairness  in access to health services by the disabled, measure for unplanned pregnancy in Thai teenagers, tobacco control, self-managing area policy  and medical hub policy. They will be submitted to the cabinet on 24 December 2010.