The new law banning chrysotile asbestos has caused a stir in the Thai roof tile industry with varied responses from tile makers.  Ha Huang brand invests 100 million bath in green innovation producing 100% asbestos-free tiles while maintaining the existing price in the hope to stay no. 1 in the market share. Diamond brand throws in  50 million bath. SCG brand holds a safe lead while Oranit brand continues to oppose the cabinet resolution. 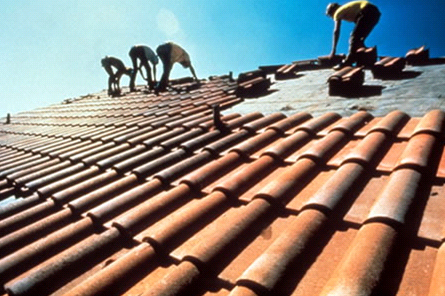 Mr. Somkiat Wongcharoensin, President of the Thai Olympic Fibre-Cement Co.,Ltd., manufacturer, and retailer of Ha Huang brand  has revealed that the company is confident about entering into the new non-toxic market. For over two years, it has invested more than 100 million bath in remodeling the entire production process to manufacture 100% asbestos-free green products. The prices have remained unchanged despite the increased production costs.
“We want to protect consumer’s health, and also hope to get an exporting visa to markets abroad”.

He has added that in the meantime, the company hopes the government seriously educates consumers on hazardous asbestos, as with earlier campaigns against alcohol and cigarette consumption. The company has hurriedly set up seminars to educate 4,000 dealers across the nation so that sellers and buyers will share similar perspectives, especially on the strength of asbestos-free roof materials.

Mr. Somkiat has accepted that the competition in the roof tile market is very high amongst four major manufacturers including Ha Huang, Diamond, SCG and Oran with a market value of 10,000 million bath. At present, Ha Huang holds the biggest share of 38% and expects to earn 4,200 million baht this year. In the future, it hopes to set up in India as distributing gateway to Bangladesh, Pakistan, Sri Lanka and countries in the Middle East.

Nonetheless, Mr. Uran Kleosakul, marketing manager of Oran Vanich Tile Co. Ltd., the producer of Oranit roof tiles, has insisted that chrysotile asbestos roof tiles are stronger and more durable and do not pose any disturbing health risks. The State should play fair by presenting scientific facts so that consumers can understand that materials used in domestic production are not the same as ones used in abroad.

“Three weeks ago, I filed a suit in the Administrative Court against the cabinet resolution which bans import of raw materials, production and selling of all asbestos products. Our company continues to manufacture and market asbestos tiles as usual with positive responses from the consumers. The demand for this kind of roof tiles is still so high that we need to run machines 24 hours a day”.