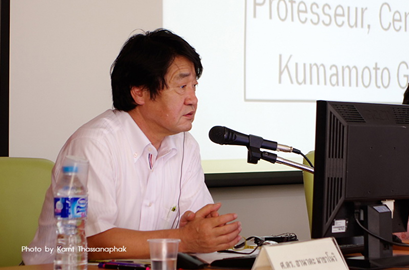 On March 1, 2013, Open Research Center for Minamata Studies of Kumamoto Gakuen University of Japan together with the Health Impact Assessment Co-ordinating Unit of the National Health Commission Office, Center for Peace and Conflict Studies of Chulalongkorn University, Environmental Litigation and Advocacy for the Wants (EnLaw) and Ecological Alert and Recovery – Thailand (EARTH) organized an International Conference on Risk Communication and the Possibility Towards Constructive Solutions for A Healthy Future of Map Ta Phut at the Faculty of Arts, Chulalongkorn University.

Map Ta Phut and nearby areas including Huay Pong, Noen Phra, Thap Ma, Map Kha and Ban Chang areas in Rayong province form the largest industrial zone of Thailand. At the same time, wide spread toxic contamination has forced locals to leave the areas. A group of people has urged the government and the private sector to solve the problem which have been responded by installing systems to monitor air and water pollution and coastal erosion, etc.. However, industrial investment still keeps expanding their business, especially chemical, petrochemical industries and coal-fired power plants.

Ms. Penchom Sae-Tang, director of the Ecological Alert and Recovery – Thailand quoted the National Economic and Social Development Board as pointing out that unless the negative impacts of industrial development in Map Ta Phut area are solved, they will affect the overall economy of the nation; and that solutions to problems in Map Ta Phut will set examples for other areas affected by industrial development. If this fails, people will lose confidence and there will be obstacles to development of new major industrial zones in the country.

Therefore, there must be serious studies on relocation of communities. Eventhough pollution emissions from each source may not exceed standards, combined pollution from all factories in the area exceed safe levels. Reduction or eradication of pollution may be costly while community relocation may carry a lower cost. It may be implemented as a long-term solution and must undergo public hearings.

Prof. Dr. Hanada Masanori, director of the Open Research Center for Minamata Studies, said Thailand is weak at strict regulation enforcement with industrial pollution sources thus facilitate release of waste. Meanwhile, local people lack knowledge about sciences and technologies and are consequently unable to argue against academics and experts on local problems. On the other hand, environmental health impact assessments (EHIA) in Thailand are neither in-depth nor relevant to local situations and mostly favor investors. He doubts the system will remain in use in the future. Moreover, compensation system for people affected by industrial disasters and pollution are few and not seriously implemented.

Assist. Prof. Pranee Panthumsinchai, former National Environment Board, said that EHIA information is publicized in Thailand but people still do not understand technical terms. Independent organization facilitates in explaining the [technical] information to them but the assistance has not been quite successful. Another issue with regard to the current penalty system for polluted industry is that the penalty ceilings (cap) are set with maximum fine, e.g. maximum 200,000 baht [and this was set decades ago] of which the value decreases over times due to inflation hence easily neglected by the industry. Setting minimum fine, for example, 20,000 baht should be imposed instead so that a court can raise fines to suit the degrees of wrongdoing.

“The ASEAN Community consists of three pillars namely economic, political, and social and cultural pillars. Surprisingly environment is not included as a core principle. How can sustainability of people in the region be discussed?” said the former member of the National Environment Board.

Mrs. Paranee Sawasdirak of the Civil Society Planning Network said communities fall victim to industrialization in the country, this is not sacrifice as often claimed, especially in the Map Ta Phut case. She strongly opposes any expansion of industries in Map Ta Phut area. She also warned that Thailand’s support for the development of a deep-sea port and an industrial zone in Dawei, Burma which will encourage transport of raw materials through our country could jeopardize food security due to possibility of toxic leakage.

It was reported that the meeting proposed the Industrial Estate Authority of Thailand (IEAT) to urgently push for policies to reduce pollution from the industrial waste that is illegally dumped or improperly disposed of. Industrial estates should have their own landfills (one estate with one landfill), so that they are responsible of their own waste and encourage waste reduction. On the other hand, government should take care of the villagers who oppose landfills in their communities because they have the rights to do so. The meeting also urged government agencies to find murderer of Mr. Prajob Nao-opas, 42, who was the late head of Moo 14 village in Tambol Nong Nae, Phanom Sarakham District, Chachoengsao Province. He led community opposition to illegal dumping of toxic industrial and chemical waste.