1.    Collective action to overcome inequity for better society. The assembly has proposed strategies for a national reform aimed at reducing inequity and promoting justice for a healthy society, namely economic reform (tax, land and inheritance), natural resources reform, social reform and political reform as stipulated by Section 87(1) of the Constitution.

2.    Control of marketing strategies of food products for infants and children. The assembly acknowledges unethical marketing practices by breast milk substitute companies, leading to a decline in breastfeeding among Thai mothers. Legislation to regulate this clear violation of WHO’s Universal Code of Marketing for breast milk substitutes should be enacted by 2012. It is also recommended that the Ministry of Labour considers the possibility of extending the paid maternity leave to 180 days, instead of 90 days while encouraging offices to set up daycare concerns.

4.    Unplanned pregnancy in teenagers. This problem seems to be on the rise, leading to abortion and dealth of teenage mothers. It has been found that teenagers are not adequately educated on birth countrol and reproductive health. The assembly proposes that the government and the private sectors should collaborate on national strategies to promote sex education and other preventive measures which should be implemented at local levels as well. All parties concerned should also work towards draft legislation for reproductive health and a strategic plan for national reproductive health development. The Ministry of Education should put in place a system to address the problem of pregnancy among students.

5.    Prohibition of asbestos. Scienctific evidence has revealed that all types of asbestors are health hazards, not only for workers in the manufacturing plants but also for users of the material. Currently 57 countries around the world have banned asbestos. The assembly proposes that the Industry Ministry outlaws the material by 2011, whether in import and export, possession or maunfacturing. Building regulations should outlaw asbestos and meausres for safe asbestos disposal must also be Implemented.  The government should set an example by prohibiting asbestos in future construction of government buildings. 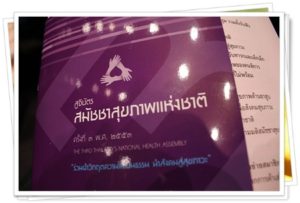 6.    In term of measures to limit risk factors of tobacco use. the 2010 – 2014 strategy to control tobacco used should be put into effect. The Finance Ministry should revise tobacco taxes so that tobacco will gradually become more expensive. There should be support systems for tobacco user rehabilitation as well as a participatory approach to support those who want to quit smoking.

7.    Self-managed areas for healthy soceity. Centralized development has resulted in inequality in self-management and budgeting.  Government support should be given to initiatives of this nature as well as collaboration with all sectors. National Committees should have a 60% representation by local administrative bodies and non-government organizations, The National Reform Committee and the National Health Commission should look into developing policies to promote self-management in order to formulate proposals and to reassure implementation.

8.    Thailand as an international medical hub. This agenda could affect Thai public health as there can be an exodus of medical personnel from government hospitals and medical schools to privated hospitals. The assembly recommends an extensive study of these policies and the possibility of regulation by the Finance Ministry to prevent or reduce negative impact. The Board of Investment should also abide by the 2009 Health Statute, Item 51, which states that the agency must not provide tax or investment priviledges to medical service providers which disproportionaltely seek commercial benefits. A national action plan should also be developed to address shortage of medical personnnel.

9.    Control of impact on public health by FTA policies. Negative impact of FTA includes pricing of alcohol and tobacco products. It is recommended that the government and all parties concerned designate as their priority the issue of public health, economic gains, and to take a stand agaist exploitation of FTA. Health Impact Assessment (HIA) should also be carried out on projects arising out of FTA. Relevant agencies such as the Ministry of Commerce should jointly  regulate pricing, investment and intellectual property in order to mitigate the effects on health and society. No obligation not thoroughly investigated in terms of negative impact should be made with FTA signatories.