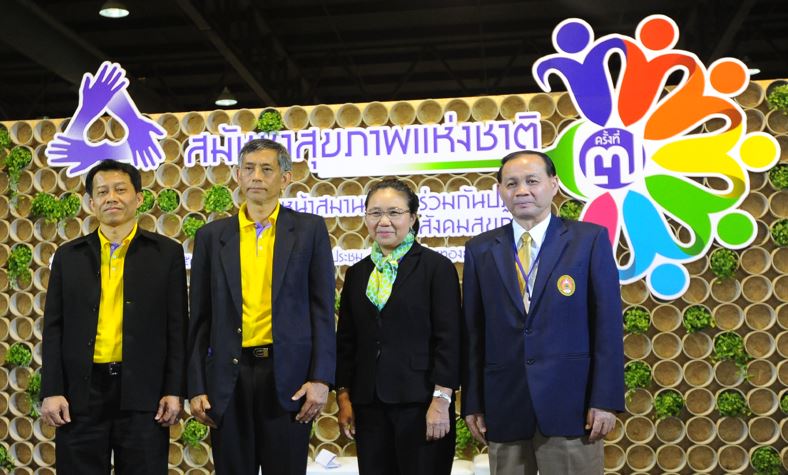 Jetsada Mingsamorn, president of the organizing committee, said resolutions endorsed in the assembly would be proposed through the National Health Commission to the cabinet and a working group following up the implementation of the resolutions would plan future actions. The assembly in 2015 is expected to address highly interesting topics which concern people’s interest and their future. One of them will be well-being of mega cities. Another issue will be the lifestyle of rice growers. These issues need to do additional academic work and to call for representatives of many sectors to think how to shape important agenda for the 8th National Health Assembly.

A new issue came from representatives of public health workers  and association of local administrative organizations. They told the organizing committee that they wanted to present their issues in the next assembly because there are nearly 10,000 sub-district health promotion hospitals and almost 8,000 health centers under the supervision of local administrative organizations. Their proposal on the next decade and the standard of primary health care will be highly interesting.

“Next year journalists will not have to interview us because they will be in the process by themselves,” Mr Jetsada said. He added other members of the assembly can also propose their agendas which will undergo academic work and be supported with researches so that when the agendas are proposed as resolutions, the government could make clear policies relating to them. Besides, the issues that were unsuccessfully implemented should be resubmitted to the assembly.

Chaiyod Bunyagidj, head of the sub-committee 1, said that in the 7th National Health Assembly his sub-committee considered four topics. They were the control of steroids which threaten the health of Thai people, the formulation of Thailand’s global health strategies, the revision of the assembly’s resolution on the protection of well-being and society from the impacts of free trade, and progress in the implementation of the assembly’s passed resolutions.

Mr Chaiyod said that very useful opinions and recommendations were shared in a friendly manner in the meeting of his sub-committee. Regarding the steroids that are harming Thai people, the meeting acknowledged that their use remained rampant in various forms. Although they are quite beneficial in terms of medicine, they have serious impacts. For example, they can cause gastric and intestinal ulcers and porous bones. The meeting agreed that the problem must be solved and prevented systematically. It proposed two solutions: the strict and integrated enforcement of relevant laws that cover the import, production and use of steroids, and education for the people who use them.

Mr Chaiyod also said that Thailand needed to formulate global health strategies because economic growth and convenient global transport brought about a large number of transnational emerging diseases that resulted from both natural causes and human influences. Efforts to control them therefore require international cooperation. The meeting viewed that a new organization should be established to work out action plans and follow up implementation and it should comprise representatives from the Ministry of Public Health, the Ministry of Foreign Affairs, the National Health Commission Office and partners.

“We know that free trade brings many advantages but it has impacts on health regarding the trade of tobacco and alcohol and intellectual property, for example. It’s a pity that the meeting could not reach a consensus on the matter,” Mr Chaiyod said. He added that the assembly followed up the implementation of ten passed resolutions and that part of the meeting interested members, many of whom called for the presentation of their achievements and obstacles.

Wanee Pinprateep, head of the sub-committee 2, said that her sub-committee considered three agendas: the formulation of public policies to integrate mechanisms to protect children, juveniles and families from risk factors, the development of a process to assess and decide the use of technologies on health, and the elimination of liver fluke and bile duct cancer.

Ms Wanee said the agenda on the protection of children, juveniles and families from risk factors complied with government policies as the risk factors that threatened children like domestic violence, pornographic media and narcotics were increasing. The agenda was entitled “the formulation of public policies to integrate mechanisms” because many governmental organizations are handling issues concerning children, juveniles and families and 14 laws and 14 committees are in relation to the issues. Therefore, the meeting proposed a mechanism to integrate secretariats of the committees formed by virtue of the 14 laws. A cabinet resolution is needed for the formation of the integration committee that will make action plans and other mechanisms that will complement one another.

Regarding the development of a process to assess health technologies, Ms Wanee said that it concerned the assessment of the use of medications and medical instruments, operations, diagnoses and treatment by conventional, traditional Thai and alternative medicine. Each instrument will be assessed. People have not seriously considered the issue and patients have been overly examined. For example, doctors order blood tests and thorough checkups for slightly ill patients. An assessment process will ensure suitability in medical practices. The meeting of her sub-committee resolved to propose the Ministry of Public Health form the “National Committee for the Development of Health Technology Assessment Systems”. The committee will comprise representatives of concerned parties including the Pharmaceutical Research & Manufacturers Association, the Thai Pharmaceutical Manufacturers Association, the Thai Medical Device Technology Industry Association, and the organizations of patients and consumers. It will set national standards, educate personnel and general people on health technologies so that they will know if their application is reasonable. The application must be based on the advantages and disadvantages of individuals and the society as well as health and economic dimensions.

Regarding the elimination of liver fluke and bile duct cancer, Ms Wanee said most participants in the meeting came from the Northeast and were very eager to share their opinions as the agenda was important and had been proposed by people in the region. About 6 million people suffer from liver fluke and are likely to develop bile duct cancer and liver cancer. A major cause is diet, especially raw fish. The meeting agreed that solution must begin with education and attitudinal change. Teachings for young children must be designed especially to change their dietary preferences. Besides, doctors and nurses must be capable of screening people for the illnesses and the Public Relations Department and the Ministry of Culture must communicate with general people to change their dietary preferences too.