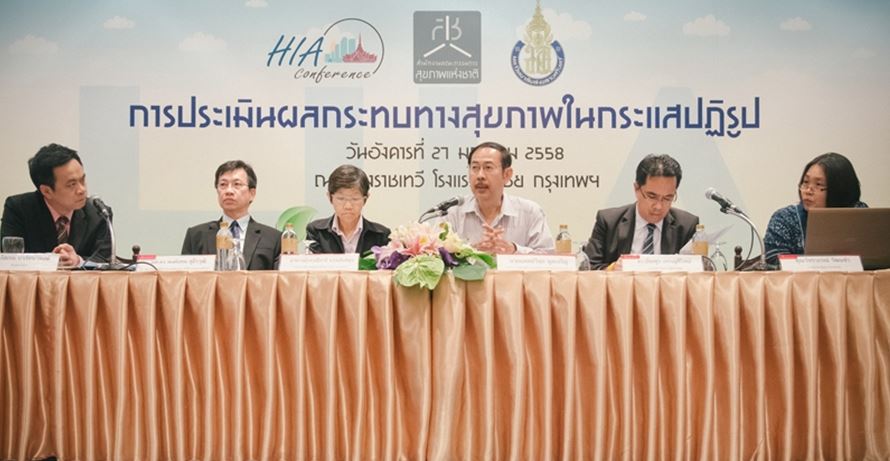 Academics and the civil society point out that development projects and policies have seriously affected communities for 16 years. They propose the National Reform Council include health impact assessment in the new constitution to require the government to promote health in all policies.

Asst Prof Pongthep Sutheerawut, director of the HSMI, said efforts to push for health impact assessment (HIA) had continued in Thailand for 16 years and it was an important instrument to develop the well-being of people and communities. HIA has required the development projects and policies of the government to be assessed for their possible impacts, supervised and followed up to guarantee health in all policies. Importantly the 2007 National Health Act and the 2007 Constitution prompted all parties to pay more attention to HIA.

“HIA is an important element that must be included in the ongoing national reform process as in the past 16 years HIA faced practical limitation and could not catch up with changes. Consequently Thailand has learned so many lessons from the projects, policies and activities that have affected communities. It is time to upgrade HIA so that it will effectively protect the well-being of communities and be applied to cope with important issues such as energy policies, the nationwide management of ores, and international trade negotiations to be in control of situations,” the HSMI director said.

Dr Wiput Phoolcharoen, chair of the HIA System Development Commission, said that the guidelines and opinions on HIA promotion that were aired in the HIA Conference 2014 should be seriously proposed to the National Reform Council (NRC) so that they could be included in the community rights chapter of the new constitution to truly empower communities. Besides, new instruments to cope with impacts should be introduced including strategic environmental assessment (SEA) which can be applied before policy-making and covers area-based environmental potential and limitation.

Dr Wiput said that members of the Association of Southeast Asian Nations (ASEAN) were jointly conducting academic work to develop HIA knowledge as some large-scaled projects covered many countries such as projects to build dams in the Mekong River and generate electricity in Laos for sales to Thailand. There will be a formal academic conference on the matter in November 2015.

Banthoon Setsirote, a member of the Constitution Drafting Committee, said many parties wanted the new constitution to maintain the chapter on the rights and liberty of Thai people as stipulated by the recently revoked 2007 Constitution, especially the parts concerning community rights in Section 66 and the second paragraph of Section 67 which required both environmental impact assessment and health impact assessment for any project or activity that would have strong impacts. They called for forums to gather opinions from general people, stakeholders and independent organizations before the implementation of such projects and activities. Meanwhile, mechanisms for strategic environmental assessment (SEA) were also proposed to cover plans and the potential and limitations of local environment. Besides, the new constitution should include the right of citizens to express their opinions and take part in making decisions.

Ms Watcharaporn also said that the scopes of project assessment that consultancies determined did not cover all affected areas. Therefore, impact assessment processes should be comprehensively improved. Neutral parties must set the scopes of environmental and health impact assessment and authority in approving projects and monitoring their impacts must not be centralized but decentralized to local people to guarantee public participation. There must be new mechanisms and instruments to ensure that. Local committees comprising local government officials, administrative authorities and community dwellers must be formed to decide on projects and monitor their impacts. By this means, people will truly have power and pollution can be solved quickly. The central government must transfer adequate authority and budgets to the local parties so that they can play the roles.

Kannikar Bunteongjit, deputy secretary-general of the National Health Commission, said that the commission was ready to help improve HIA mechanisms and processes to enable people to protect their own well-being from policies, plans and projects. Since the promulgation of the National Health Act seven years ago or in 2007, many communities have petitioned to exercise their rights under Section 11 to conduct HIA at the community level. This shows the potential and awareness of people in developing health justice.