NHCO / Story of the Month  / The National Health Workforce Commission is concerned about the soaring number of migrant workers and plans to import personnel from neighboring countries to serve the migrants
by Pectcharath Kongvichienchep
Story of the Month, 2012

As the number of migrant workers reaches 4 million in Thailand, the National Health Workforce Commission plans to temporarily tackle the shortage of doctors, nurses, simultaneous translators and health personnel by importing personnel from neighboring countries to serve ill migrants in designated areas and maintain sufficient health services for Thai patients.

Recently the National Health Workforce Commission chaired by Dr Mongkol Na Songkhla considered a health workforce plan concerning health services for migrant workers. The plan was proposed by Dr Phusit Prakongsai, director of the International Health Policy Program Office, in his capacity as secretary to a subcommittee facilitating the implementation of resolutions from the 63rd World Health Assembly. The plan results from an academic conference on the health of migrant workers and solutions for fairness in health systems on October 15, 2012. 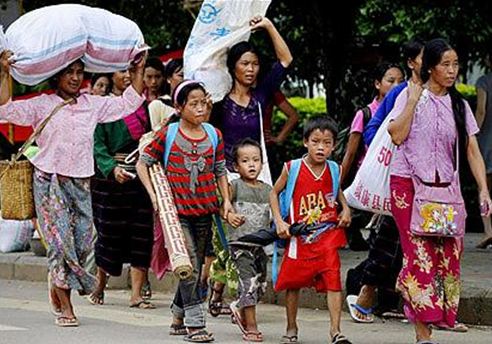 According to reports, legal and illegal migrant workers amount to as many as 4 million in Thailand; therefore, resources must be developed to provide them with sufficient health services especially in the provinces where fishery and tourism are active as well as in border provinces including Samut Sakhon, Phuket, Tak and Chon Buri. The numbers of migrant workers seeking services from state-owned health facilities in these provinces are overwhelming and exceeding the capacities of existing health personnel. There are also communication problems with migrant workers. Besides, ill aliens considerably occupy beds at hospitals because they see doctors only when they are critically ill. This affects Thai patients who have to resort to private hospitals.

Hospitals are facing the following problems.

The formation of the ASEAN Community is likely to bring about the following problems.

Besides, the health workforce commission resolved that its secretariat will convince concerned committees and organizations including the Medical Council of Thailand and the Ministry of Public Health to cooperate with short and long-term solutions because problems concerning migrant workers are serious and Thailand will join the ASEAN Community in 2015 and thus has to cope with the movements of workers that will increase in accordance with investment trends in the future.

The commission endorsed strategies for Transforming health professions’ education  to suit health demands in Thailand. This is among the nine agendas in the 5th National Health Assembly that is set at the Bangkok International Trade & Exhibition Centre in Bang Na, Bangkok, from December 18 to 20. The commission also acknowledged results from a study on the overseas work of Thai nurses by Assoc Prof Dr Nanthapan Chinlamprasert et al who discovered many hardships of Thai nurses in other countries. In addition, the commission approved strategies for local workforce management in accordance with the second phase of the action plan for the implementation of strategies for the national health workforce (2013-2016) to decentralize authority in workforce management to local officials.