The Commission on Revision of the Statute on National Health Systems held a meeting on February 27. The session chaired by DrNarongsakAngkasuwapala was aimed at laying down frameworks and directions for policies, strategies and actions relating to national health systems as the statute is subject to revise every five years after its promulgation in 2009. On the occasion, the commission revised three chapters. For Chapter 1 on the philosophy and basic concepts of health systems, the commission agreed that health should be considered as both right and responsibility of people and that punishment for fatal medical malpractices should be carefully set. Besides, the commission viewed that decisions on parties responsible for fatal medical malpractices involve sensitive factors that are difficult to judge. The commission decided to maintain the principle of sufficiency economy and key content in the statute.It viewed that sufficiency economy is fundamental to the good mental and physical health of everyone. 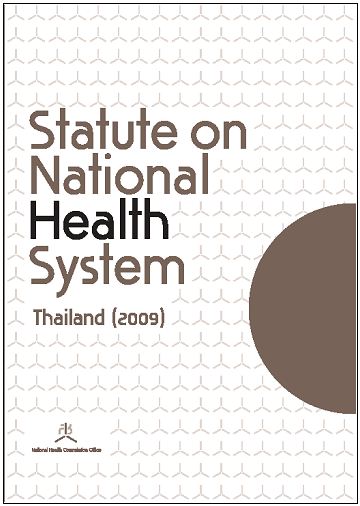 For Chapter 2 on desirable characteristics and goals of health systems, the commission agreed that they must be based on morality and humanitarianism which reflect good governance and on the lifestyles and cultures of communities, and support the functions of health systems. For Chapter 3 on the provision of health security and protection, the commission viewed that the provision must cover all people in Thailand and all social determinants of health, be they personal and public factors, to guarantee equal and fair access to services.
The commission intended to reach conclusions and guidelines for the drafting of the revised statute that will be proposed through the National Health Commission to the cabinet approximately in October 2015.
DrNarongsak said that the revision commission emphasized the awareness of the society and stakeholders’ participation in determining the content of the statute. It expects them to result in the wider application of the statute. The commission viewed that the awareness and the participation could happen through various activities to gather opinions including public deliberations, citizen juries and issue-based public hearings organized by academics.
“The public deliberation on ‘The Future of Thai Health Systems’ of which the Office of Promoting Politics of the People under the King Prajadhipok’s Insitute was the main organizer focused on the desirable health systems of Thailand, reasons for the development of the systems, the parties responsible for the development and guidelines for actions to realize the development. Representatives of sectors and groups of people nationwide including groups of people with disabilities, ethnic/stateless peopleand religious groups attended the deliberation. The discussion concluded that health systems should cover six areas namely public health services and the quality of the services, agriculture and food, traditional Thai medicine and herbs, funds, laws and acts, and the good physical and mental health of Thai people.”
Citizen juries are a new form of public hearings and suit the issues that lead to conflicts or disagreements. The commission considered two issues. One is long-term care for the elderly as Thailand has become an aging society and needs policies to handle related health problems. The other issue concerns the health services that have brought about different viewpoints. The Research and Development Office of the King Prajadhipok’s Institute was asked to conduct an operational research simultaneously to develop knowledge about citizen juries and make relevant analyses on the pros and cons of their application to gather opinions on public policies in Thailand.
“The citizen jury on the aging society in Thailand looked at necessary systems to provide the elderly with long-term health care. There are three main systems. One refers to the care provided by family members, relatives and neighbors. Such care declines especially in urban areas because local people have heavy burdens and focus too much on materialism. The people have easier access to health services but rural people, despite their poor financial status,receive better care from family members and relatives and can also depend on neighbors. Besides, we have found that many families lack equipment to deliver care to the elderly and many families choose to hire elderly care takersto do so at home.”
Elderly care by communities comprises the distribution of supplies to the old and the development of special areas for old people. Lamsonthi Community in Lop Buri province and communities in Kuchinarai district of Kalasin province succeed in having families and community dwellers take good care of the elderly.They focus on four basic elements: medical care, physical rehabilitation, mental care and care for care takers. The communities receive support from all parties: the government, local administrative organizations, community dwellers, hospitals and non-governmental organizations. For example, health workers pay regular visits to the elderly’s homes. Care takers are sent to treat old people at their home occasionally. Concerned parties improve the houses of the elderly and produce appliances to assist old people.
For the last form of care which is care at service facilities, there are various kinds of public and private elderly care facilities in Thailand but their number is still insufficient. After the formation of the ASEAN Community, people from other countries are likely to seek care for their old relatives in Thailand and consequently more old Thai people may be abandoned.
The citizen jury also proposed a department or a ministry take direct responsibilities, clear roles of all concerned organizations be set, their operations be integrated, financial mechanisms such as funds and budgetary allocation be realized, personnel be developed in terms of their quality and quantity and receive returns, and complete databases of the elderly be compiled. The citizen jury also called for the elderly care that covers all groups of old people, public health services, mental and physical health promotion, disease prevention and control, funds and allowances to help the elderly, the development of the elderly’s potential in economic, social, religious, cultural and recreational areas, the management of the elderly’s environment and sustainable lifesaving systems for the elderly.
Source: Banmuang’s edition on March 9, 2015
Photo source: National Health Commission Office
Click the icon to lock. Turn the wheel to scroll. Click anywhere in the background to close this window.
Lorem ipsum dolor sit amet, utinam nusquam alienum cum ei, no maluisset constituam nec. Eam omnium conclusionemque ea, alia partem consequuntur per ut. Ea has viris mandamus patrioque, vim vidit dolore accommodare ne. Purto doctus constituam qui eu, scripta qualisque has ei, id mea solum verear invidunt. Nec vidit bonorum ea, te minimum fierent sadipscing vix.