Villagers in Tambon Klai locality of Tha Sala district in Nakhon Si Thammarat province are upset with the environmental health impact assessment report of Chevron Thailand Exploration and Production Co Ltd that plans a port and facilities to support petroleum exploration and production in the Gulf of Thailand. They demand the Office of Natural Resources and Environmental Policy and Planning (ONEP) reveal the complete report on the environmental health impact assessment (EHIA) of the Chevron port because they believe there are some inaccuracies that will affect them.

On Nov 6, Dr Niran Pitakwatchara, head of the subcommittee on community rights under the National Human Rights Commission, organized a forum in a meeting room of Walailak University in Nakhon Si Thammarat province in response to villagers’ complaints on the EHIA of the project. He invited about 300 people to the forum. They included representatives of the ONEP, the Marine Department, the Tha Sala Tambon Administration Organization, concerned fishermen and affected villagers. Chevron did not send a representative to the session and claimed it was not ready for the discussion. 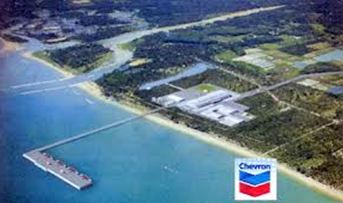 Mrs Piyanant Soponthanaporn, director of the Environmental Impact Evaluation Bureau under the ONEP, confirmed that the planned port of Chevron was designed to be 330 meters long and 33 meters wide and stand 500 meters from the coast; therefore, it was considered as a project with possible environmental and health impacts on communities in accordance with the second paragraph of Section 67 of the Constitution 2007. The project owner filed a proposal with an expert committee tasked with scrutinising the environmental impact assessment of infrastructure and other projects on Sept 10, 2010. The scrutiny committee ordered information improvement for seven rounds and endorsed the proposed impact assessment on Sept 11, 2012, as the company has worked out measures and completely responded to reservations from the committee.

“I admit that in the seven rounds when the committee disagreed and ordered improvement, it considered many issues including public participation, impacts on communities, religions, lifestyles, health impacts, assessment on heavy metals, silt, dredging, sediment disposal, oceanographic data, wastewater treatment systems, the use and drainage of water, marine ecosystems, impacts on fishing resources, land and water traffic regarding the port project, occupational health and safety, the design of the port and the prevention of coastal erosion. They have responded with sufficient information, so it is approved,” Mrs Piyanant said.

Miss Somporn Pengkham, director for health impact assessment coordinating unit of the National Health Commission Office (NHCO), demanded the ONEP reveal the final EHIA report that the scrutiny committee approved on Sept 11. She doubts the completion of criteria by the scrutiny committee and measures to reduce environmental impacts. She said she had followed up the making of the EHIA report and surveyed the ecosystem of Tha Sala Bay with community dwellers since 2008 and found that the ecosystem was unique. There are over 200 kinds of fishing resources, the sandbanks that are the breeding grounds of aquatic animals and the sources of fishermen’s living, and the coral reefs where fishermen make their livings in a 20-kilometer radius. However, the company studied impacts in a radius of only five kilometers from Tambon Klai and this does not cover outer fishermen.

“Fishing communities including Ban Nai Thung village that is nearly 10 kilometers from the construction site and fishermen with 2,000 other boats in Tha Sala Bay that are outside the assessment area will face environmental and health impacts. They are the most vulnerable group facing risks from the project. They can be affected directly by silt from dredging and activities of Chevron but I do not understand why the assessment scope is limited at the radius of five kilometers. I would like the ONEP to reveal the complete EHIA report and the NHCO and other organizations will verify whether the stated measures will be really sufficient to reduce environmental impacts.”

Bangmu Charoentoh-itae, a fisherman in Ban Nai Thung village of Tha Sala district in Nakhon Si Thammarat province, said villagers had conducted an additional study and asked the ONEP to protect the sources of foods in Tha Sala Bay that covered four Tambon (village clusters) namely Tha Sala community, Tambon Tha Khuen, Tambon Sai Kaeo and Tambon Klai in accordance with Sections 43 and 45 of the Environment Act 1992. He said there were unique ecosystems in the localities including the ecosystems of Khao Luang Mountain, the rivers and the sandbanks that had been the permanent food sources of local people for generations. He said that if the port was built, the communities would cease to exist. Therefore, villagers want the areas to be declared protected zones.

A representative of the Department of Fisheries proposed the Administrative Court grant an injunction against the approved EHIA. The representative said the assessment was based on the outdated information that Tha Sala Bay was deserted and had no resources. Villagers have proposed their study which concludes that the bay is a source of plentiful foods and the port can destroy the coral reefs that are the sanctuaries of fish and aquatic animals in the area.

Paranee Sawasdirak, an independent academic on city planning, said the project site of Chevron in Ban Bang San village of Tambon Klai in Tha Sala district was one of areas designated by the city planning draft of Nakhon Si Thammarat that was already approved by the Tha Sala Tambon Administration Organization. The location is defined as a green area where industrial activities and the transportation of chemicals are prohibited and the draft is undergoing a process to be announced in a royal decree in 2012. She asked if the scrutiny committee based its decision for the EHIA of the Chevron port on the content of the draft as the port is planned to include a seaside chemical warehouse.

In the forum, the subcommittee on community rights inquired about many matters from the representative of the ONEP. They include the question if villagers’ request for the protection of Tha Sala Bay will be approved before the port is completed for the sake of local communities and inquiries about measures to contain the negative impacts of dredging. The ONEP representative said that cutter suction dredgers and silt curtains would be applied to protect ecosystems during the dredging of navigation channels. Three sides of silt curtains will be used to form a U-shape structure to limit the thickness of silt at one meter from original sea floors. Their installation must be completed in eight months.

The ONEP representative said the office received the request from villagers for consideration and that a relevant action would take times because the declaration of an environmentally important area that deserved protection had to follow a hearing and obtain the consent of all concerned parties. Therefore, the declaration may not occur before the completion schedule of the project set at 18 months after next year.

‘If the port is built, the communities will cease to exist.’