What happened in the 9th National Health Assembly Four missions towards ‘Thailand 4.0’

NHCO / Story of the Month  / What happened in the 9th National Health Assembly Four missions towards ‘Thailand 4.0’ 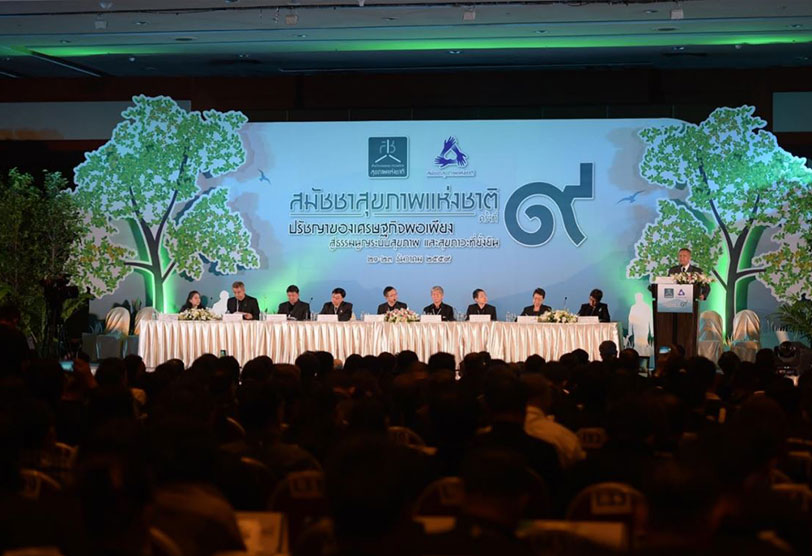 The 9th National Health Assembly was organised at the IMPACT Forum convention centre in Nonthaburi province on December 21-23, 2016. It was a platform for government agencies, academia, professions, private sector, civil society organizations and members of provincial health assemblies to share their views on local and common issues.

For this session, the National Health Assembly had four major issues on top of its agenda: 1) residential, community and urban management and development for well-being; 2) safe drinking water for people; 3) integrated and participatory health promotion for early childhood; and 4) area-based control of mosquitos.

The four issues reflected the local problems that provincial health assemblies had presented. The latest National Health Assembly gathered opinions and came up with resolutions concerning the four issues. It also followed up work related to its previous resolutions.

Many resolutions and issues discussed in health assemblies at various levels in evidence base  and participatory manner led to concrete national policies including control on emerging diseases from other countries and the quick screening and treatment of chronic patients.

“The more I learn and experience development through health assemblies, the more I am aware that Thailand has potential worth enhancement. We have excellent instruments to promote participation in development. Many other countries need them and want to learn from us for their own adaptation,” said Dr. Poldej Pinprateep, secretary-general of the National Health Commission. The heart of social development through the National Health Assembly was “the collaborative development of knowledge through evidence and democratically participatory manners,” he said.

Health assemblies were both an instrument and a goal, Dr. Poldej said. As an instrument, health assemblies are “participatory public policy processes based on wisdom” (4PW). The key to success is that all parties – the government, the private sector, the civil society and academic organisations – exchange knowledge and experiences based on knowledge, information and facts peacefully without any emotional desire to defeat anyone.

Finally the exchange will result in common solutions. No parties would gain or lose more than any other. Participatory democracy happens when all sectors do the exchange in neutral forums regulated with impartial mechanisms and rules.

Above all, the processes are tangible democracy because they are based on communities having their say through local health assemblies.

It is called an academic social process. Apart from being a neutral area for the promotion of public policies, such a forum will be an opportunity for accused organisations to share their own stories.

The important issues on the agenda of the 9th National Health Assembly were developed from the problems that provincial health assemblies had presented, said Dr. Poldej. There were about 30 common problems. Of them, four issues were selected to be on the agenda for their priorities and potential solutions.

Resolution on Safe Drinking Water for the People

Regarding the first issue of safe drinking water for people, pharmacist Worawit Kittiwongsoontorn who was the deputy head of a working group on safe drinking water said people in many areas were interested in the matter because they reported it to the National Health Assembly. Their information showed that natural water sources were problematic for many households in Thailand because the people were unable to drink from the sources anymore.

“This leads to the big question as to how we can use the instruments of the National Health Assembly to provide people with access to clean and contamination-free drinking water at a reasonable price,” pharmacist Worawit said.

Besides, the Food and Drug Administration was asked to check the quality and prices of drinking water from vending machines, and consumer protection agencies were contacted to teach people about safe drinking water.

For the issue of integrated and participatory health promotion for early childhood, Dr. Thongchai Lertwilairatanapong, deputy director-general of the Department of Health who headed an academic committee and a working group on the issue, said a survey by his working group found that in Thailand many organisations were interested in solving problems jeopardizing the well-being of infant to young children. They had plans to improve the young’s quality of life. However, health information showed that young children in many areas had poor development and suffered from nutritional deficiency.

The strategic plans of the organisations indicated that they lacked connection. Concerned officials agreed that there would be efforts to improve the physical, mental and spiritual health of young children so that they would be well educated and developed into quality teenagers and adults in the future.

For the area-based control of mosquitos or aedes, Dr. Wichai Satimai, a specialist of the Department of Disease Control and head of a working group, said people in many areas were worried about an epidemic of dengue hemorrhagic fever and the huge population of its carriers, mosquitos. The concern resulted from the death of a well-known actor who had contracted the disease and then developed complications. The epidemic of the disease had direct impacts on health and tourism in the past year.

Although the government and the civil society have seriously tried to solve the problem, there is still room for improvement in many dimensions. Therefore, the National Health Assembly reached relevant resolutions. Under the resolutions, concerned organisations at local and provincial levels will develop knowledge and strategic plans and report the results of implementation. The organisations will work with local health committees to research on the elimination of striped mosquitos. The Health Systems Research Institute will lead their work for the sake of sustainable solutions to dengue hemorrhagic fever.

Resolution on Developing and Managing Healthy Community and Urban Housing

Ruangyuth Teerawanich, head of a working group on the well-being-oriented management and development of residences, communities and urban areas, said the residential, community and urban management and development for well-being was also an important matter compared to the three above-mentioned issues because secure and safe residences were the key to good physical and mental health. He stressed that the urban residences of low-income earners, especially those living in public and private areas, concerned people in many zones.

His working group found that thousands of families presently living along railway tracks must be urgently provided with secure residences to pave the way for double-track railway construction. The working group agreed that relevant organisations should provide the people at all income levels with access to the residences that suit their local contexts.

Progress of the Previous Resolutions

Apart from the four main issues, the latest National Health Assembly also reviewed important issues of the assembly in the past nine years and followed up the progress of their impmentations. The assembly found that many issues that the assembly had discussed led to policies and their local implementation. They were developed into the resolutions that greatly successfully saved people from epidemics.

Lately a concrete outcome from the resolution on emerging diseases was Thailand’s effectiveness in controlling a Middle East disease carried by the patients who secretly arrived in the country twice.

The effectiveness proved itself again when Thai medical personnel quickly controlled the Zika virus disease that arrived from Singapore.

The 7th National Health Assembly reached a resolution to cope with liver fluke and the cancer of bile ducts that were widespread in the North and the Northeast. The resolution resulted in screening for the illnesses in 24 northeastern provinces. The tests found that about 100,000 people were healthy and about 600 others developed early stages of liver cancer. The patients received early treatment to prevent the cancer from spreading.

Dr. Poldej said that the National Health Assembly had worked on a wide range of issues in its past nine years after establishment. Many resolutions from the assembly were developed into government policies, many of which became safety nets protecting thousands of people from deadly diseases. The four big issues from the latest National Health Assembly are also bringing about similarly important public interests.

“The mentioned concrete outcomes clearly resulted from the grass roots having their say on health problems in a democratic manner through local and national health assemblies. Participants in the assemblies basically exchanged their knowledge and experiences based on academic knowledge. Their resolutions have been seriously transformed into actions in order to make Thailand ‘Thailand 4.0’,” Dr. Poldej concluded.