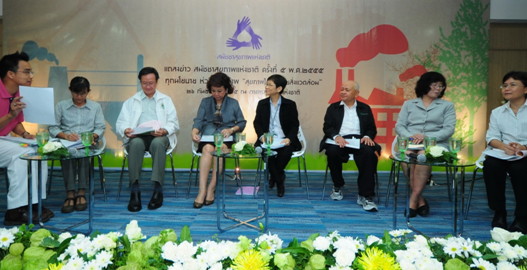 Ms Sirina said “The assembly is important as it will be the public forum where all parties and sectors in the society can exchange knowledge on developing the society of well-being in a united manner. This year the committee conducted a field survey and found that the health problems of Thai people result from their lifestyles and environments. Although economic growth is important, all parties must help prevent possible impacts on the health of Thai people in the long run. The organizing committee is concerned about the impacts of the development projects of the government and the private sector that do not pass environmental impact assessment (EIA) and health impact assessment (HIA) before implementation. The construction of biomass power plants is very good but they may create pollution. Deforestation by fire to expand farmland causes the smoke haze that harms health. So, there are three topics concerning ‘health in environmental policies’. There are the reform of environmental and health impact assessment, the prevention and reduction of the impacts on health of biomass power plants and solutions to the smoke haze that affects health.”

Kannikar Bunteongjit, deputy secretary-general of the National Health Commission, said “Nine topics will be high on the agenda. Networks will send their representatives to the National Health Assembly. All concerned parties will also attend it to collectively and carefully work out the policy-related proposals in which all parties have their say and that are practical.”

Suchaya Ummaralikit, director of the Office of Environmental Fund under the Office of Natural Resources and Environmental Policy and Planning of the Ministry of Natural Resources and Environment, expressed her strong support for the National Health Assembly to consider EIA and HIA with all concerned parties this year. She said “the National Act for the Promotion and Conservation of Environmental Quality requires 35 kinds of businesses to undergo environmental impact assessment before implementation. However, there is the limited application of academic knowledge to conduct the assessment. Concerned agencies have plans to develop knowledge about the assessment and people should be allowed to participate in its process.”

Dr Narongsakdi Angkhasuwapala, the National Health Commissioner who heads a working group on the prevention and reduction of health impacts from biomass power plants, said some small-scaled biomass power plants caused negative impacts on the environment and nearby communities as the burning of biomass gave off black smoke and soot in their vicinities. If they are run with good management and concerns about health and the environment, biomass power plants can be the good sources of energy in the country. Relevant organizations should issue the regulations that require small-scaled biomass power plants to conduct EIA, apply clean technologies and stand far from communities so that people do not have to inhale toxic smoke. “Biomass power plants with the generating capacity of lower than 150 megawatts use the fuel that is difficult to burn and finally as much as 10-38% of their fuel remains with incomplete combustion. This creates the pollution in the form of particulate matters that cause respiratory illnesses when they enter lungs and alveoli. Studies of the World Health Organization confirm that the inhalation causes respiratory illnesses, has impacts on heart patients and increases the frequencies of asthma.”

In conclusion of the press conference, Dr Somsak Sukwong, head of an academic working group on solutions to health hazardous smoke haze, said “The problem of villagers burning forests to expand farmland is a cause of widespread smoke haze and dust in many provinces of the country. As chemicals used by farmers including weedkillers are also burnt, smoke haze harms the health of those who inhale. As smoke haze becomes worse every year, the government and local administration organizations must solve the problem together with communities. Studies show that there are four causes: the burning of forests to expand farmland, especially cornfields in the upper North; the daily burning of household garbage due to insufficient garbage disposal services and poor landfill by local administration organizations; traffic problems due to poor mass transit systems; and the industries that cause air pollution from the incomplete combustion of such fuels as chaff and sawdust. The Faculty of Medicine at Chiang Mai University has found that smoke haze causes the risks of four groups of illnesses namely respiratory illnesses and asthma; cardiovascular diseases because of the impacts of inhaled polluted air on the functions of red blood cells; skin diseases due to the irritation of skin and eyes resulting from highly acid toxins; and impacts on the brain due to narrowed brain arteries.