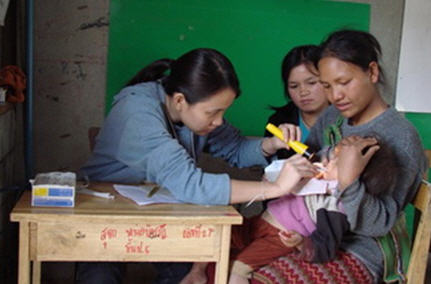 Three political parties presented their populist health policies. The Democrat Party has seven policies for system improvement and a long-term health finance master plan. The Bhumjaithai Party focuses on the improvement of primary health care and the deployment of doctors at all sub-district hospitals in 10 years. The Pheu Thai Party vows to revive its 30-baht health care scheme. Meanwhile, academics point out that existing policies have not led to any concrete achievement. Besides, they lack emphasis on health promotion over illness treatment. The policy to improve sub-district hospitals has resulted only in the changed signs of the hospitals’ names.

Democrat Party pledges improvement of health security.
Dr Buranaj Smutharuks, spokesman of the Democrat Party, said populist policies could not ensure health security. People must have access to good services. Therefore, the government allocated 2.4 billion baht in the 2011 fiscal year and 2.8 billion baht in the 2012 fiscal year to improve health services. The allocation shows the peak of government sponsorship for health security. However, good health depends not only on hospitals but     also on proactive health promotion policies.

The Bhumjaithai Party vows to improve sub-district hospitals and the quality.

Mr. Manit Nop-amornbodi, deputy leader of the Bhumjaithai Party and former deputy public health minister, said his party would focus on treatment quality as it was a widely discussed topic when it came to free medical treatment. Although the government spends over 100 billion baht on the free treatment annually, its cost keeps rising due to several reasons including the growth of the senior citizen population that outnumbers the capacities of hospitals. Therefore, it is necessary to enhance the capacities of sub-district hospitals to screen patients and provide them with primary health services in order to reduce the number of patients waiting at general hospitals. Each sub-district hospital should have resident doctors and the party plans to achieve this goal in 10 years.

“This will also help solve the overall problems of the health system. Doctors and nurses can have their workloads relieved. Treatment quality and capacities will improve. All agencies will be mobilized to collectively and proactively promote good health. This will not be restricted to the Public Health Ministry. Local people will be authorized to take charge,” Mr Manit said.

The Pheu Thai Party will revive its 30-baht health care scheme with a co-payment method.

Mr. Wicharn Meenchainant, deputy leader of the Pheu Thai Party, said if his party was elected to government, it would see to the medical services that the 1997 constitution defined as fundamental rights and would make the services through all the three health security funds equal. The party will revive its 30-baht medical care scheme which was a co-payment one. The Thai Rak Thai Party initiated the scheme that is replaced with free medical services. The revival will prevent the excessive use of the services. The low-cost medical service scheme will be extended out of work hours so that workers can see doctors and the extra hours of the medical services will not be restricted to emergency patients only. The service in extra hours will charge 300 baht per patient. The policy should be welcomed and it will be among initiatives to relieve the workloads of health agencies.

The party also vowed to address the shortage of medical supplies and personnel and expand health promotion efforts and health care for senior citizens nationwide through the work of village-based health volunteers. In other countries, there are second-home projects for the old. They refer to the residences where senior citizens live together and join useful activities.

The party will also emphasize the prevention of illnesses in addition to treatment. It plans to provide girls aged under 15 with cervical cancer vaccine to reduce its incidence.

Ammar points to the lack of concrete progress and the shortage of doctors. 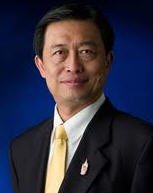 He thinks that the 30-baht medical care scheme that covered all illnesses is the best policy. People have access to treatment without having any concerns on payments. However, he doubts if the government can really afford it. The expansion of medical services to serve the increasing number of patients is another challenge. Patients are packing hospitals. The expansion of primary health care services by the Public Health Ministry to Sub-district hospitals has resulted only in the new name signs of the hospitals. The real development of primary health services takes times. To deploy resident doctors at every sub-district hospital, the government must produce up to 10,000 new doctors and it must be committed to the production.

Mr Ammar said that problems about services by different health security funds were being relieved because the government already arranged subscribers and budgets appropriately among the three funds. However, no parties talk about reducing the health welfare of government officials especially when the election is about to happen.

The government must invest more in health service facilities because their services are very poor. Besides, doctors’ salaries must be addressed to retain them to prolong their services. “I would like political parties to promise that when people see doctors, doctors will spend at least 15 minutes examining each patient. At present, people only have access to clinics. Then they wait for examination and meet a doctor for less than five minutes.”
Besides, political parties must think how they can design conditions and communications to attract more people to use primary health facilities to relieve congestion at hospitals so that each patient does not have to wait longer than an hour to see a doctor.

Dr Amphon Jindawatthana, secretary-general of the National Health Commission, said political parties had not improved their policies as their solutions did not address root causes. They emphasize medical treatment instead of solving root causes to prevent health problems or changing the policies that have negative impacts on health. Unless political parties change their policies, the overall public health system of the country will collapse because government budgets can never afford medical treatment.

Political parties should base their policies on two visions. With a broad vision, political parties will see that health issues concern more aspects than cure, health funds and the operations of the Public Health Ministry. They will focus on solving the shortage of budgets and doctors. With a long-term vision, political parties can set the goals that will benefit people although it may take 10-20 years to achieve them. For example, work toward universal health coverage must not be done with a short-term vision that results in such a populist policy as financial returns for village-based health volunteers. The policy may deliver quick results but it damages the country and its opportunities.

“I have not seen any political party announce a policy to make people healthy by promoting good health rather than curing sickness, making people unhealthy, or causing more accident fatalities and more illnesses. Political parties should announce that they will take health issues seriously.”

Dr Amphon also said that the Democrat Party had not stated clearly if it would continue to promote public participation in health promotion policies and that there was not a clear policy on power decentralization. 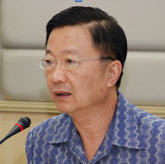 Dr Samrit Srithamrongsawat, director of the Health Insurance System Research Office, said that in general the policies of political parties were not much different and that he did not see any clear sign that those policies could be achieved.
He thinks that the policies that will benefit the majority of the population and solve conflicts are the policies that will reduce inequality. He sees two aspects of inequality that must be addressed. One is inequality among health security funds in which government officials enjoy more privileges than members of other funds. The other is inequality between urban and rural people when it comes to their access to treatment. Solving the latter aspect of inequality will better reduce conflicts. He calls for the immediate improvement of primary health services and sees the sub-district hospital policy as part of the improvement. The changed name signs of such hospitals may result from an intention to see a quick difference. Actually staffs are the key to the improvement.

He also wishes political parties to present the policies that will highly effectively improve health services like the health security policy. He suggests the managerial structures of the Ministry of Public Health and the National Health Security Office be reformed. He said that their managerial structures were irrelevant and caused administrative problems.